Why over-inflating your agricultural tyres costs you more money

When should you increase the pressure in your tyres? Generally speaking, it's when the weight of the tractor and its tool cause excessive compression of the tyres, which often leads people to increase tyre pressure in order to increase tyre resistance, and to over-inflate their tyres to avoid them being crushed when using heavy tools. 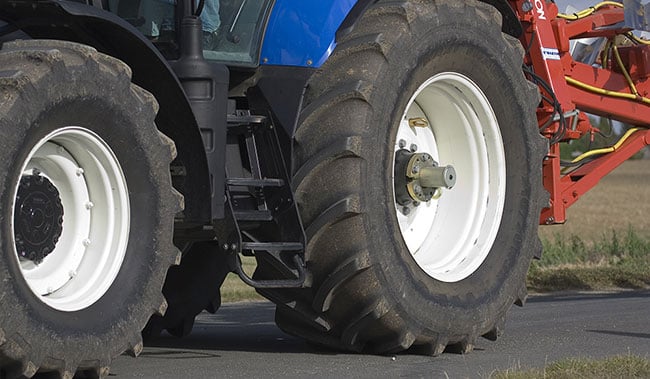 However, this decision often has major consequences in terms of operating costs and will adversely affect your yields in the long term. Here's why:

When a heavy tool transfers too much load to your tractor's rear axle, it's the tyres that will bear the brunt of this by deforming and caving in on themselves. The degree of deformation depends on the weight they are under, as well as their inflation pressure.

Over-inflation will result in excessive slip, greater rolling resistance, and rut formation in wet conditions, and more seriously in the long term substantial soil compaction that will reduce your yields.

If you often drive on roads with your tractor, an over-inflated tyre at 2 bar can use 30% less fuel than a tyre inflated to 0.8 bar (an appropriate pressure for fields) because there is minimal rolling resistance on tarmac. On the other hand, the complete opposite is true when driving in fields: an over-inflated tyre will have less grip because it's footprint will be smaller, the lugs won't have enough contact surface area and mud removal will be more difficult.

Anything over 15% slip will cause the top layers of soil to slide horizontally, degrading its structure. In addition, the actual distance travelled by the tyre will be greater than the actual distance travelled by the tractor, and as a result more fuel will be used: 20% higher fuel consumption with 30% slip, and that's without factoring in premature tyre wear. 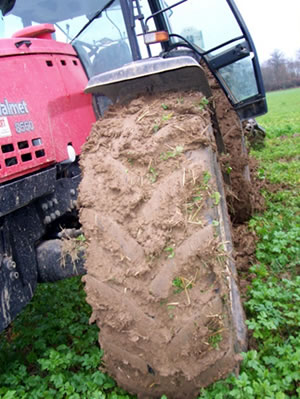 The same tyre, used in the same conditions,
doesn't slip at 1 bar but does at 1.25 bar

Tyres and the ground are two deformable elements. Under heavy weights, the tyre collapses in on itself and the soil compacts until the two balance each other out. If the tyre is inflated to a high pressure, it will collapse less but will dig deeper into the soil, especially if the ground is soft.

And the more your over-inflated tyre digs into the soil, the higher the rolling resistance will be: 1 cm of extra depth translates into 10% more fuel used.

Over-inflation will lead to rut formation in wet conditions, which means more work for you to restore the field and its productivity.

The light soil structure also promotes biological activity. When your tractor, tools or other agricultural machinery passes over the soil, they compact it, and even more so when the tyre pressure is too high.

Yield losses due to compaction are around 20% after a few years, and reach up to 50% for heavy clay soils in wetter regions.

To learn more and boost your farm's profits, Bridgestone Agriculture is offering you a free, detailed eBook that explains the essential role your agricultural tyres play in your productivity.