Say you want to save a bit of money when replacing your tyres, and you've found a bargain second-hand set on Agriaffaires just a few miles away from your farm that you can go and view before making your decision.
There are a number of pitfalls you should watch out for, and here are some that you can easily spot with the naked eye.

Obviously you should expect a certain degree of stud wear on second-hand tyres, but that's exactly what you should be interested in because it often reflects how these tyres have been used and can give you a lot of information:

1. There is too much wear and the lugs have completely worn away on the right or left hand side 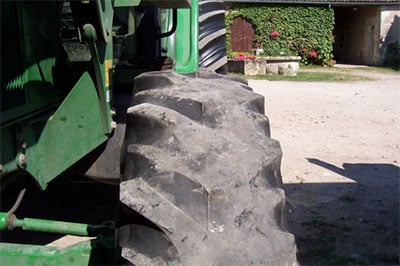 If some of the tyre is practically smooth, do not buy it because it's already very old and the end is nigh.

If the seller is claiming it's only 2 or 3 years old they're almost certainly lying, and we wouldn't be surprised if the tyre was actually double or even triple that age.

Even at a rock-bottom price, it's not worth it: if the police were to spot you driving on the road with that tyre they would make you stop the tractor and replace the tyre there and then. All that money you'd saved (and more) would go up in smoke because you're in no position to negotiate the price for a new tyre in an emergency.

There would also be a high risk of you getting a flat tyre, which again would bring your vehicle to a standstill and incur all the costs that go with it. A set of tyres with worn lugs will have no grip, zero traction and too much slip, and as a result your fuel consumption would go through the roof.

2. Scratches on the tread: on the lugs and at the back of the structure

Cuts on the lugs

If the lugs are scratched and ripped across their entire surface, with straight cuts crossing over tears on the leading and trailing edges, it means the tyre has been driven over flint terrain or abrasive, rocky ground. There is a strong possibility it has been used for non-farm work, such as time on a demolition site or quarry.

Given the tyre's previous working environment, you should be particularly vigilant for any signs of cuts on the sidewalls, as these may be more serious than on the reinforced tread.

You can buy a tyre like this if there are no deep cuts on the sidewall, but it will be less effective in open fields because the degraded lugs will have a low hauling capacity.

3. Scratches on the back of the structure only

Slight cuts on the tyre

The tyre seems to be in good general condition, but it looks like the back of the structure between the lugs has been scraped with coarse rocks. It also has minor cuts on the leading edge of the lugs. This type of abrasion is due to very hard stubble, such as sunflower or maize.

There is no issue with this tyre, but you should still inspect the sidewalls carefully to ensure there are no major cuts that could cause you a problem.

This is because a deep cut may be hiding a breakage inside the tyre structure, and will pose a risk of high pressure if you drive on a road at higher speeds.

4. Deformation due to impact on the tyre sidewall 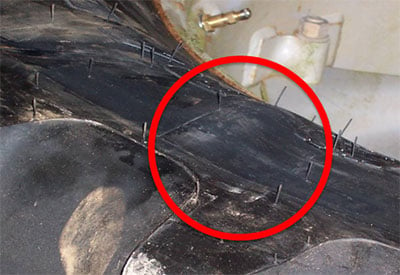 Deformation due to impact

External deformation on a tyre sidewall may be the consequence of a violent impact, with the deformation caused by breakage of the cords inside the tyre structure.

Since the tyre is weakened it would be wise not to buy it, even for a low price, because it could burst if fully inflated and used to drive a long distance on a road.

It will also be likely to puncture if a rock or branch presses against the fragile area, thus immobilising your tractor. 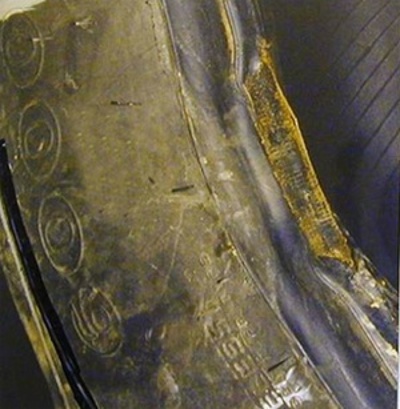 The tyre bead may be damaged when the tyre is mounted or dismantled, especially when not done by a professional.

The bead will look as though it's been crushed, because the machine used to mount the tyre was used incorrectly. If this is the case, the tyre cannot be used because you won't be able to mount it on your tractor. In fact, it would be a bad deal even you're given the tyre for free, given how risky it would be to mount.

If the beads are not positioned correctly, or mounted manually with lubricant, the bead wire might be stretched and might even break when pressure is applied. The tyre is therefore at its maximum risk of bursting, and could seriously injure the person attempting to mount it.

6. Cracks in the tyre rubber 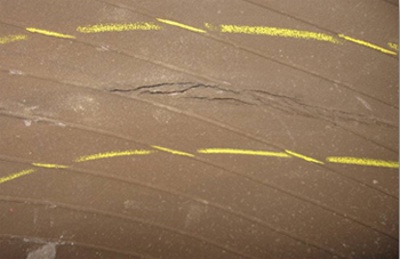 Cracks in the tyre rubber

Beware! This type of crack in the butyl rubber essentially puts the tyre out of service, because it's a sign of substantial weakness in the internal structure. Do not buy the tyre if you see cracks like this, no matter how cheap it is.

These cracks are due to improper usage – the wrong pressure was applied and the tyre underwent a lot of flex and deflection at insufficient pressures.

It's highly likely that the load was often too heavy and the inflation pressure too low, meaning this tyre is extremely fatigued even though its outer appearance may seem to say otherwise.

7. Cuts at the base of the tyre lugs 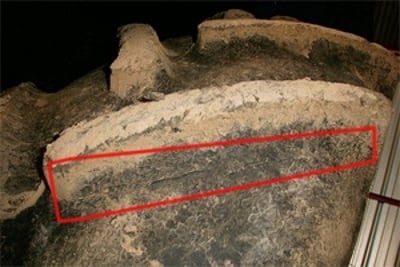 Cuts at the base of the tyre lugs

You see cuts on the base of the lugs, starting from the tip and running horizontally along its length. This type of cut is a sign that the tyre is very fatigued, and has been subjected to excessive tractive force on hard soils due to excessively heavy loads being transferred to the axle.

Excessive twisting of the lugs on the ground has caused them to shear, and parts of them may have torn off completely, leading to strong vibrations and potential loss of control of the tractor.

This is usually accompanied by flaking on the top of the lugs, which is further evidence that the tyres have been used hard and traction torque pushed to its limit.

As you can see, there are many pitfalls you need to be wary of and that can easily escape notice, especially if you're blinded by a low price. A good deal may seem very appealing, but it'll often turn out to be more expensive in the long term because you'll end up changing your tyres more frequently, and at much more risk.

The most cost-effective option is usually to keep an eye out for promotions on new tyres, which will be much more profitable and durable while offering you peace of mind and guaranteed safety.
To learn more and boost your farm's profits, Bridgestone-Agriculture is offering you a free, detailed eBook that explains the essential role your agricultural tyres play in your productivity.

This information is intended only to make you aware of the technical and functional aspects of agricultural tires and their use. It does not allow you to make a judgment or a definitive conclusion on a given problem. Only your agricultural tire expert is able to make a technical assessment and take a final decision, case by case.